Renowned for its location, business climate and affordable cost of living, Northeast Indiana is consistently ranked best in the Midwest. 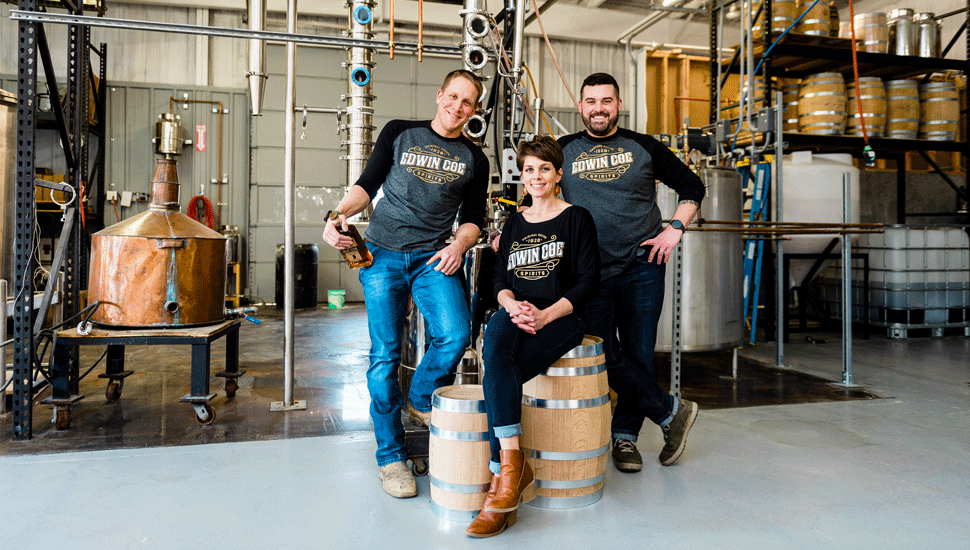 For Joseph Collins making whiskey is in his genes. His great-grandfather Edwin “Coe” Dupuis was known for the prohibition whiskey he started making in 1928. Dupuis’ goal was to make his whiskey clean and good, his mantra, “It just tastes like more.”

Collins started his foray into whiskey making as a hobby, while working in his family’s Churubusco-based industrial painting company. But he soon realized this was his passion, and as he continued to perfect his craft, he also discovered he truly had a natural gift to create clean and really good tasting spirits.

“I tried brewing beer a few times, but I wasn’t good at it. I tried distilling and it really clicked. It just made sense to me,” said Collins, who can easily go off on tangents about wheat and yeast. “I’m just so jazzed up and excited about what I do.”

With the encouragement of Kristin and his mother-in-law, Collins got his license to start a legal distillery. “I really wanted to keep the recipe alive,” he said. He sold his motorcycle and began with about 800-square-feet of space, a mash cooker/beer stripper combo he nicknamed Frankie (Frankenstein’s Monster), and a 26-gallon vodka column that could be used to make whiskey.

Collins also began to rely more and more on Luke Liggett, a high school friend who was a steamfitter with the Local 166. Liggett and Collins got to work on building and modifying equipment to suit their needs. In 2018, Liggett fabricated the distillery’s 23-plate vodka column.

Edwin Coe has now taken over 5,000-square-feet of the industrial building that formerly housed the family’s painting business, and is making five products: Vodka, soft gin, rum, barrel-aged rum and Old Coe (its flagship product). It now has over 150 points-of distribution at local liquor and grocery stores, and its spirits are served at local restaurants including; Joseph Decuis, Proximo, Hoppy Gnome and Black Canyon.

The distillery’s tagline is “It just tastes like more,” and this is what drives Collins. “Everything we do, we try to make just a little bit better. We want to constantly improve our quality and to push ourselves. We are very ambitious with lots of enthusiasm. We constantly want to do more,” he said.

“When we first got our permits, we made some Old Fashion cocktails with one of the last bottles of Old Coe made by my great-grandfather. We made a toast and then quickly got back to work.”

Mosier was instrumental in making high-quality education accessible beyond #FortWayne including bringing on the War… twitter.com/i/web/status/1…