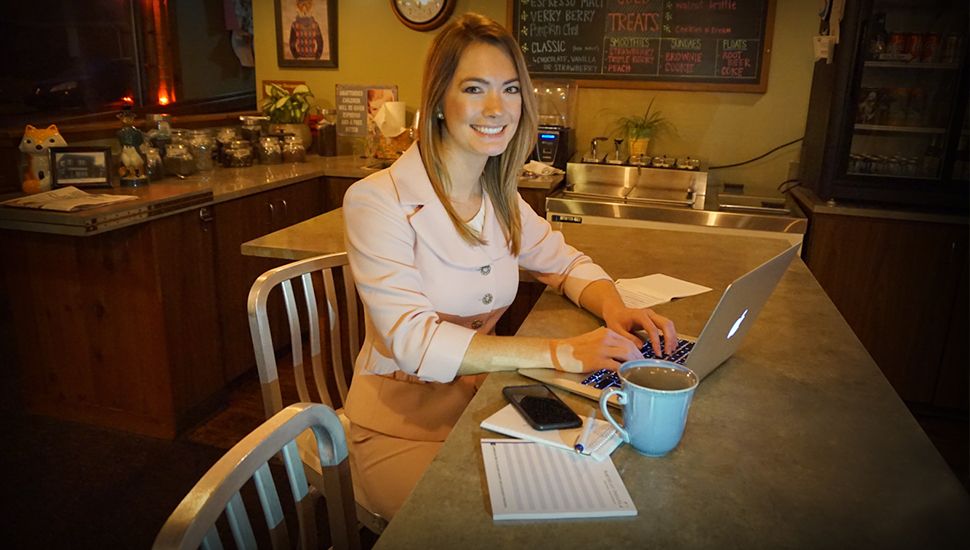 What exactly is Input Fort Wayne?

Input Fort Wayne is a weekly online publication written like a magazine and it is partnered with a weekly email. The real idea is to fill the gaps in traditional publishing. There is a lot of great coverage of local news and also business topics. We saw this opening in the market for a news magazine hybrid that might not be receiving the attention of newspapers. Many magazines charge for articles so this is a way for people and local entrepreneurs to be featured in a non-traditional publication. Input Fort Wayne wants to feature those that are underexposed in our community and the impact they are having. ​We don’t see ourselves as competition. We understand that many news organizations have their place and are doing important things. We want to talk about the areas of Northeast Indiana that might otherwise go unnoticed.

Will you tell me more about you and how you became Managing Editor?

I worked for a local paper as a social media manager. I really desired content that would inspire critical conversations. We often see inflammatory news and negative content that you can post that would set people off but not a lot of content that would drive positive conversations and open minds. I found in my research that when people read or hear positive stories that they are more open to solving conflicts. In my studies, when people read or hear something uplifting, they are more likely to find the energy to solve the problems.

In order to invest in theses places and solve the problems, you need to have positive news and a reason to take pride in your community. This is what attracted me to want to tell these type of stories. It will allow us to take pride in where we live. It will show the cool things that are happening here both for those that live here and for those that don’t live here for them to know about.

I have worked at a couple of local agencies and when I thought about my next move, writing was always on my radar. I had the opportunity to write for YLNI and Huffington Post. I really wanted to get back into the local scene. I made phone calls and was connected with Crystal Vann Wallstrom and Joe Noorthoek when Input Fort Wayne was in the early stages. After a year of public meetings and finding sponsorships, Input Fort Wayne was officially born and I was named the Managing Editor.

Issue Media Group is backing Input Fort Wayne and has a number of cities it works with after starting in Detroit. After there was so much negative news in the Detroit area, people didn’t feel that their efforts were being accurately represented. People wanted to see accurate exposure about entrepreneurs and startsups around town as well as exciting new projects from a Detroit local perspective. It was called Model D. They saw a need in other cities (usually a second or third largest city in a state) where you can really see a new community emerging. They are trying to tell the new story of these cities. This includes the rebirth of these cities and showing these cultures after large companies like General Electric and International Harvester left. Economy and surroundings have changed since then. There is lot of new business and the idea is to showcase these people and their businesses. Issue Media Group has a strong desire to showcase the evolving culture of Northeast Indiana and cities like it across the nation.

I am the point person and the main eye for the publication but Crystal and Joe, and Brian at Issue Media are actively involved. This project is not just mine. We want it to be a community publication that locals can take ownership of from writers to photographers. This is going to be a big group effort. We are editorially independent so we can pick our stories. We do minimal ads; our website is not cluttered with pop-ups and we allowed this to happen by having sponsors. Sponsors pay into it because they believe in the mission behind it.

Will you give me examples of stories that aren’t being told in Northeast Indiana that you want to put a spotlight on?

A second area is entrepreneurs. Fort Wayne has manufacturing jobs, new startups, and people that are mid-career that are ready for a new opportunity as well as young people and those that are well into life and looking for something new. There isn’t a publication that speaks to this but we want to show people what is happening in the community and even things that are half-baked. Often times in order to get into a magazine or paper, you have to be successful and established. I have had so many topics shut down because people I wanted to feature weren’t a measured success yet. I think showcasing these ideas even if they aren’t full-fledged successes yet is another way to show our strengths.

A third area is anyone who feels excluded from our community. We don’t like to use words like "diversity" just to use them. We could talk about abilities or disabilities or race or income or age and much more. Older people in the community feel like only young people are being planned for. We want people to have an outlet that they haven't had in the past right here in our community.

What is the plan for the future of Input Fort Wayne?

I want to expand into video. My dream is that it is something that people look forward to each week throughout Northeast Indiana. When they have a question about the region they can go to Input Fort Wayne because they can count on us to tell the story. You can take time to read these stories each week in Fort Wayne and throughout the Northeast Indiana region. I want people to feel more connected and I think we all want to feel a strong connection to what is happening around us from Warsaw to North Manchester to Angola to Fort Wayne. We are all so busy but we hope people will take the time to read a quick snapshot of what is happening in our region.

People are overhwelmed because there is a wealth of information online. There are already great publications in numerous places including LaGrange, Fort Wayne, and Columbia City but we are trying to fill the gap of headlines that are fascinating via snapshots of this emerging culture. We are giving you a snapshot of these communities. There is a wealth of information in these cities but we are also conscious that as a regional resident that you can’t keep up with the entire region on a daily basis. Our goal is for Input Fort Wayne to be a place where things from all over the region are being reviewed and packaged into an email for you to showcase and highlight, and then share with your network easily on social media. We want to show the whole region and unique sectors of Fort Wayne. We aren’t the only outlet you should read but we are a good way to skim through what is happening in the communities. We are here to provide a wealth of information and narrative of culture for Northeast Indiana.

Interview and photography by Stephen J. Bailey for the Northeast Indiana Regional Partnership.