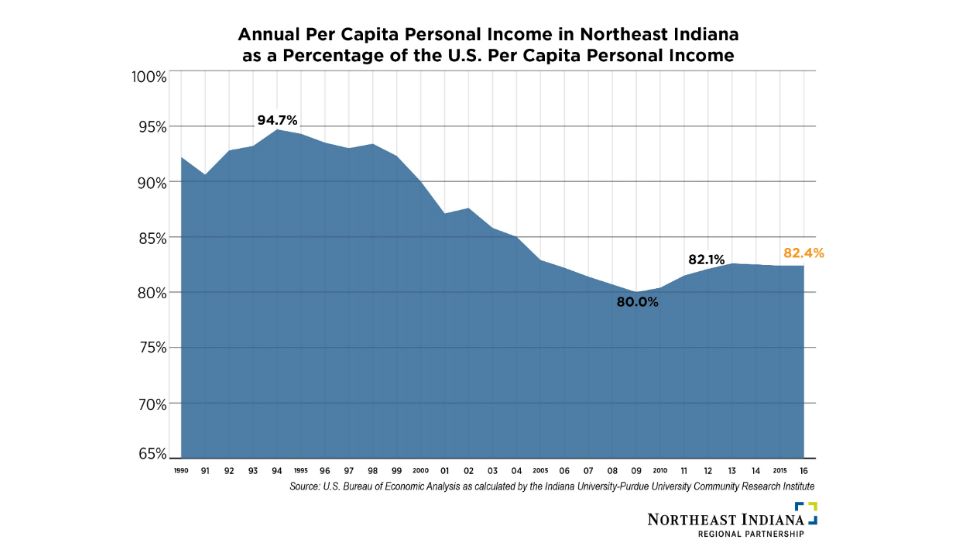 Per Capita Income Data Released for 2016

FORT WAYNE, Ind. – The U.S. Bureau of Economic Analysis released 2016 per capita personal income (PCPI) numbers, and Northeast Indiana grew at the same pace as the national average at 1.6 percent.

Personal income circulating in Northeast Indiana’s economy increased by $613 million compared to 2015, resulting in a $788-per-person increase in personal income. The region’s 2016 per capita personal income was $40,559.

“In 2010, Northeast Indiana residents earned 80.4 percent of the national per capita personal income. For 2016, that rose to 82.4 percent for the 11-county region. From 2010 to 2016, Northeast Indiana’s PCPI increased by more than 25 percent while the national measure went up only 22.3 percent in that same timeframe. These numbers demonstrate the effectiveness of community leaders, working together through efforts of the Northeast Indiana Regional Partnership, to increase per capita income to improve the economic vitality of the region,” said Rachel Blakeman, director at the Community Research Institute at Indiana University-Purdue University Fort Wayne.

“There is no question, we are making tremendous strides together as a region in confronting our most difficult constraints to the Northeast Indiana economy,” said John Sampson, president and CEO of the Northeast Indiana Regional Partnership. “Despite annual challenges, this region’s employers continue to emerge as contenders in the global marketplace. We will not waver in our commitment to the priorities of Vision 2030 or working together as a region. We know what is most important, and we are determined to raise prosperity for the residents of Northeast Indiana.”

Per capita personal income is calculated as the total personal income of the residents of a geographic area divided by the resident population of the area. The data is released annually by the U.S. Bureau of Economic Analysis and was calculated by the Indiana University-Purdue University Community Research Institute. The November 2017 data is a preliminary report. The final data will be released in May 2018.

The data is released annually by the U.S. Bureau of Economic Analysis and was calculated by the Indiana University-Purdue University Community Research Institute.

Investing in people: This #FortWayne program helps youth ‘Pave the Path’ to the future they want:… twitter.com/i/web/status/1…